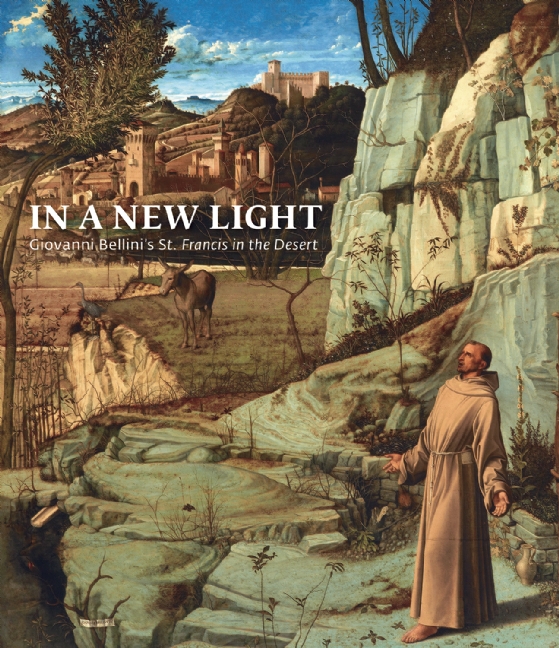 A monograph of a single picture, In a New Light reveals Bellini’s masterwork as never seen before

Winner of the Choice award for Outstanding Academic Title 2015

"The Frick Collection has such a star and has produced this superb book about it"—Holland Cotter, The New York Times Gift Guide

Giovanni Bellini’s St. Francis in the Desert is a masterpiece of Venetian Renaissance art that has inspired generations of visitors to The Frick Collection. This monumental panel painting portrays Francis of Assisi, the medieval Christian saint who renounced earthly riches to embrace a humble existence of poverty, prayer, and obedience to the Gospels. Departing from canonical representations of the holy man’s life and miracles, Bellini has imagined Francis alone in a mountainous wilderness, stepping forward from his simple shelter into a golden light that seems to transfigure him spiritually. For centuries, viewers have puzzled over the work’s meaning—seeking explanations in a variety of pictorial and textual sources. Until recently, however, the artist’s practical conception and realization of this extraordinary vision have remained largely unexplored.

In a New Light presents the collective findings of an unprecedented technical examination of St. Francis in the Desert. Following a series of in-depth analyses—including infrared reflectography, X-radiography, microscopy, and paint sampling—an international group of specialists considered the artist’s working process and its implications for the picture’s meaning. Their conclusions provide a “glimpse over Bellini’s shoulder” and open new avenues of research into Venetian Renaissance painting and its cultural and religious context. Also published here for the first time are recently discovered documents pertaining to the provenance of St. Francis in the Desert during the nineteenth century, as well as synthetic studies of the work’s Franciscan milieu and early history.

Denise Allen is curator in the Department of European Sculpture and Decorative Arts at the Metropolitan Museum of Art and former curator at The Frick Collection.

Joseph Godla is chief conservator at The Frick Collection.

Charlotte Hale is paintings conservator at the Metropolitan Museum of Art, New York.

Susannah Rutherglen is exhibitions research assistant at National Gallery of Art, Washington D.C. and served as Andrew W. Mellon Pre-Doctoral Curatorial Fellow at The Frick Collection from 2009 to 2011.